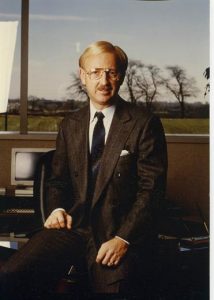 Surround yourself with great people. Without that, you can’t accomplish a whole lot. Give them responsibility and let them be accountable to that.  If you try to make all the decisions and you think you have all the right answers, you’re not going to learn from the expertise of the people around you.

Never underestimate the value of relationships. Whatever people you meet and develop relationships with, at some later point in life those relationships may be very valuable—even if the value isn’t apparent at the time. Relationships are important; don’t burn bridges.

A strong work ethic and integrity are a couple key things I learned from my Dad—he was an electrical contractor.  I remember a project where the customer was happy with his estimate.  However, when completing the project, my father reduced the price because it cost him less than what he originally estimated!  He was a good model for me—there’s nothing more important than your integrity.  Things aren’t going to come to you—you’ve got to work for them.

It’s tough to differentiate yourself in any industry if you do things the way they’ve always been done—or if you live within the rules other people have set. Things progress and change; you can’t stay on the same track.

Learn from your mistakes. I’ve made as many mistakes as anybody, and the key is to admit them and move on. If you’re surrounded by good people, then you listen to them and rely on them when you do make mistakes.

You create your own opportunities. Lighting is a very small industry—there are a few big companies, and as a result of that, everybody knows everybody. That can work to your advantage or disadvantage…word travels pretty fast.  The job that you do will be noticed, even by people outside your company.

Over time, I think I’ve become more patient. In earlier times, I would have inserted my opinion into a situation earlier, and not let people think through a situation to a conclusion on their own. I’ve realized that I made enough mistakes of my own, and it helps people develop if you sit back and let them learn.

There’s not necessarily one right way to do something. My dad wanted me to go into electrical contracting, but your best chance of being successful is doing something you’re really passionate about. I’ve watched my kids and grandkids all grow and develop; it’s been neat to see how they’re all different—each has their own talents!  I’ve especially enjoyed seeing the way my son has been able to grow and reach success in ways that even I can’t.

Persistence is very important. I have a saying:  ‘It’ll take twice as long and cost twice as much.’  If you’re not willing to invest as much as that, then it’s not worth doing.  A lot of people don’t succeed when they should just because they’re not persistent enough at following through. They give up too easily, accept an offer, and think it’s taking too long, or is too hard.

If something’s worth doing, it’s worth doing right. If you can’t justify doing it right, don’t do it at all.  A lot of people have done something halfway and it failed.  They say it’s a good thing they didn’t invest too much in it, but if they had done it right, it wouldn’t have failed.