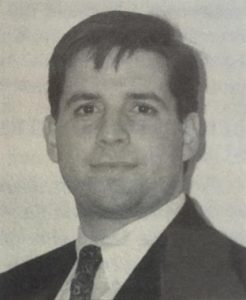 I grew up in Philadelphia in an environment where thick skin and a good sense of humor went a long way.**

I’ve relocated maybe 8 or 9 times in my career.  In a great way it teaches you the value of a family.  Coming out of it, my children are very much open to new things, there is a flexibility there.  There is a certain learned adaptability that they’ve developed from having to relocate so many times.

You really need to put in the time with your children—as you’re sitting down with your kids to do their college applications and you realize at that point that there’s nothing you can do to fill in any of these blanks. It’s a body of work that was created by good and bad decisions over a period of time.

Sometimes you need to think out of the box, but mostly you need to swing the bat. I learned this from a friend and coworker in my late 20s, one of the most effective leaders with whom I have worked.  He made informed decisions, but didn’t overthink things.

My daughter taught me how to be organized. Looking at her, she is definitely one who is naturally organized.  It’s funny how she takes situations and lays them out. My son has taught me about perspective. He has a nice way of looking at the world in a very broad scale.

I have learned over time to surround myself in the work place with people different than me. This diversity eliminates blind spots and makes for a stronger organization.  When I see a lack of disagreement in the organization, it always makes me nervous.  It means we aren’t speaking our minds.

Success is not final; failure is not fatal. I am a big fan of youth sports because these lessons can be learned at an early age in a low-risk environment.  They can certainly be learned at a later age, but it usually comes with quite a bit more pain.

I think in my early thirties there was a point where I had to go from the guy who could outwork or out-hustle my co-workers to someone who had to be a leader.  Early in your career your success is based on your personal achievements, so later you learn that as a leader our goal is to make other people successful. Once I was able to make that transition, I felt my impact increased.

My parents taught me about integrity and hard work from an early age.

It takes years to build trust and an instant to destroy it. We are in a great industry where you get to build your reputation over time – good or bad.

It’s important in marriage to make sure you’re having fun. It’s funny—when I was in law school, the first orientation was with a big group. They stand up and tell you, “There is going to be a certain group here who are married and whose relationships won’t survive through law school and the first few years of practice.” And this was coming from the Dean of the law school! His suggestion was, you’ve got to go through it together.