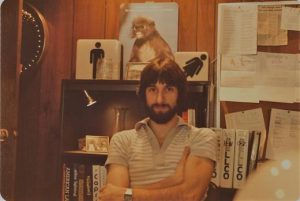 Marriage is teamwork. Everybody uses the term partnership, and it is. It’s not like one person leads— you have to compromise and work together for it to last. For example, if I’m going to be heading off to an IES conference or a district event or something local, my wife and I have to understand schedules—there are times my wife is involved with things for her work. You can’t be a family man and then a lighting person—it’s all the same and I’ve learned to put it all on the same calendar.

When I first started in the industry, I worked side by side with a guy who was a commercial lighting consultant. I had to unlearn most of what I learned from him—he was always ‘gotta win the bid at all costs.’ That created more enemies than friends. It was a sad situation—the glory he seemingly gained by winning that bid by somehow finagling the low number left a bad taste in peoples’ mouths. It taught me that you shouldn’t use people but share the road with people—you need them side by side, you don’t need them under your feet.

I’ve learned to surround myself with a variety of interests—not just those within our industry—it’s helpful for a variety of reasons. You never know when you just might need to change careers. Who knows [laughs]? Someday you might just want to be a plumber!

When my daughter was born, in it was an open adoption. We got to the hospital just a few hours after she was born. The hospital was supposed to be giving her over to us, but the head nurse decided that the birth mom needed to spend time with the child, which caused the mom to want to keep her child after all! We spent four days in hotel rooms going through a hell where we were waiting for lawyers and counselors—we were not in a good place. As we were starting to head home in the car, the birth mom called us and said, ‘Come and get your daughter.’ ‘Are you sure ?’ I asked her. ‘Yes, I haven’t changed my mind.’ We went to the house, and she opened the door, put our daughter in my arms, and said, ‘Here’s my daughter.’ This lesson put a lot of grey hairs on me at that point—my wife and I were broken, but it was a celebration when we got home. We’ve learned to be there for our family and friends in challenging situations, because they were there for us.

I’ve learned you have to build trust and consistency to have a solid relationship. If you tell someone ‘I’ll work with you on this project,’ then you have to work with them on the project. Your word is your bond.

I’ve learned the benefits of taking a walk. A long day hike in the North Cascades is equal to one week of vacation.

In my first lighting job I was working in the lighting department for an electrical distributor. One of my former clients, an electrical contractor, said we want you to start a lighting design department: ‘It’s a risk, but if we go out, we go out together.’ That attitude impressed me! I said, ‘Sure, let’s go for it.’ I learned to have a go-for broke attitude—don’t be afraid of the big guy. Later we learned to purposely go after the big guy. We had nothing to lose [laughs]—and it worked for us!

I’ve learned to enjoy the journey.

The last 6 months of my dad’s life, he had a lot of physical issues, and I spent a lot of time in and out of hospitals and rehabilitation centers to get him stabilized. I spent a lot of time with him in hospital rooms. We had a lot of conversations—we were talking not as father and sons, but as friends. Two weeks before my dad passed, he was going downhill. The doctors were feverishly working on him. My dad turned to me, took my hand, gave me a big old smile, he kissed my hand, and said, ‘I love you, son.’ He said, ‘You [Dan and his siblings] are all in great situations, you’re taking care of yourself, you don’t need me anymore. It’s time for me to go.’ I’ve found that there are ends to journeys—and that is okay.