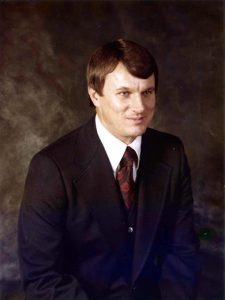 I learned over time you can really accomplish more by being more patient and understanding. That doesn’t mean you don’t hold people accountable or make sure they do what you want them to do. That was a lesson I learned in both parenting and at work—be more patient and more understanding—a little less critical.

I was not very patient early on in my marriage—I was a really hard-charging person. I now consider my wife to be my best friend. Ever since we got married, divorce or leaving one another was never a consideration. We had problems like everybody else, but whatever it was we were always going to work it out. We knew we were in this thing together—we believe we’re in it for eternity. Even if we had an argument, we knew we would make up and everything would be okay. If I had it to do over again, I would do it very different. Finding a balance is not the easiest thing to do.

In business, one of the things I really regret is this: there were a few people that I’d fired because I wasn’t happy with their performance—but I ended up hiring people to replace them that weren’t as good as they were. I looked back and said, ‘Wow, the person I hired wasn’t as good as the person I’d fired!’ I was very quick to terminate people if they didn’t perform—I did regret a couple of times where I looked back and said, ‘Wow, I should have worked more closely with that person and not been so quick to fire.’

When I was a teenage boy, my father was a horrible alcoholic—he was a bad guy. I idolized him growing up, he was a cowboy and I wanted to be just like him—I’d dress like a cowboy and act like a cowboy—but as I got older, I realized how bad he was and how much I disliked him. My dad was off somewhere drunk all the time while my mom worked three jobs. I lived with my uncle and lived in a rented apartment—I never resented that because I knew I was going to work hard and do whatever was necessary. My dad never gave me one thing as far as a piece of advice that was good or positive. I decided I’m never going to be that type of father—and it really motivated me. I was going to be in complete control, work hard and put my best effort into it. I viewed it as a positive, though—I said to myself, ‘That’s not the way I want to live’.

I spent 35 years in the industry and it was an extremely rewarding experience. I started out as a humble sales guy and ended up becoming a CEO of one of the largest lighting companies in North America. To me, it’s a good indicator of what can be done. I wasn’t born with a golden spoon. It was through work and loving doing what I did. I never worked a day in my life—I loved what I did every day.

My wife and I have known each other since we were kids. 50 years this May! My wife is a very patient, loving person and she puts up with a lot from me. We dearly love each other—she’s my best friend! She likes to ride horses and golf. She’s musical, I’m not, but I participate for her. In learning to work together, we’ve grown closer and closer. We’re still individuals and we’re not perfect all the time, but we always know that we’ll work it out—not working it out is never an option.